The Buddha Touching the Earth 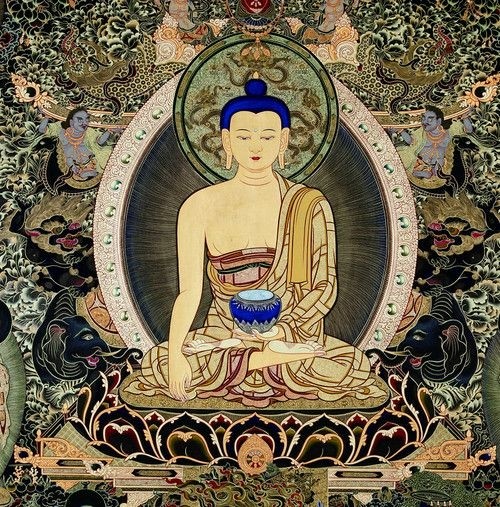 At the moment of enlightenment, after the Buddha-to-Be’s six years of exhaustive effort, going the limit, trying and trying with all he had, Mara appears before him and makes one last ditch effort to tempt the ex-prince with self-doubt. “How could you, a sheltered ex-prince be worthy of the Supreme Goal of complete enlightenment?” he asks. “It’s impossible. Many better men than you have tried and failed. Give yourself a few lifetimes at least work at it. Back off.” But the Buddha didn’t waste time in arguing with Mara or trying to give some kind of answer. Instead he touched the earth and let the earth witness for him.

And the earth spoke with countless voices as one voice, saying that there was not a single spot on the globe where, in some past lifetime this ex-prince hadn’t already given himself in total effort for the sake of enlightenment and the welfare of all beings, human and non-human alike; that he hadn’t disappeared into that effort, totally consumed.

What could be more ordinary – or more telling? Touching the earth is touching the ground, the clay or dust of which we’re made. (Adam of course, first man, is made of adamah – Hebrew for “earth.” “Human” is from the latin humanus – “groundling.”) Touching the ground is touching the ground of Being. Of Being Us. (“Sesshin” means to “touch the mind.”). Which means something as simple as touching one’s ordinary nature, including all that’s led to us as this person/this moment. Acknowledging and accepting it all the way down, including past errors and past efforts, we can let our own jataka past, our past births and lives speak for us and give us strength too.

The jatakas are the Buddha’s practice history. We, too, each have our own jataka history that led us to where we are now, that testify to, and confirm our nature. Not as some grand and distant ideal, but simply as what it is, what we are. The scar on the knee from the fall from that tree when we were eight; the tendency to cough at moments of stress; the stiff ankle, remnant of the twist we gave it running too fast to dokusan twenty years ago; the failures, efforts, and mistakes. Just as we are.

What else is there to draw strength from? What else is real? Where else would we turn without turning away and looking for some ideal, some concept to save us?

The earth, the ground of being itself is our support. But it’s dirty, full of microbes, germs and bugs. It’s not sanitized, not safe. Do we really want it to testify for us? Yet, when we were children we could stretch out fearlessly on it.  We could roll on it, lie on it and gaze up at the clouds and sky and birds. We could pick up dirt, rub it into our jeans and hands and hair and come home shining with joy. When did we become afraid to touch the earth? When did we start to think we were too good for it, that it was not just our support, but “beneath us?”

At his moment of final challenge the Buddha simply touched the earth. He didn’t try to out argue Mara. And the Earth Mother said, “It’s not the first time he’s done this. He’s earned it. It is the right time. This moment is the culmination of it all. So many efforts have come before. I am the witness. The time is now.”

What makes it such a truly lovely story is that it’s not simply ancient history. It’s our story, too. At the very least, this very moment right now is part of the jataka of so many as yet un-fully-realized Buddhas, who will also one day completely touch the earth when the time is ripe.